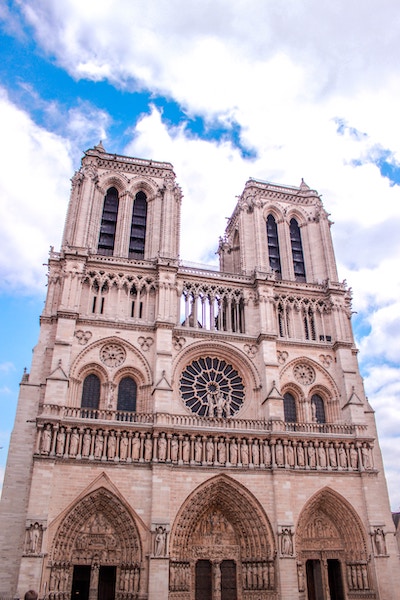 As a child, I learned the following old poem while using little hand motions:

“Here is the church.
Here is the steeple.
Open the doors,
And see all the people!”

One of the most misused and misunderstood words is “church.” We often think of the church as the building where we worship, but do you realize that the church of the first century rarely met in a church building?

Listen to some of the ways the term “church” is used in the New Testament:

Acts 12.5 – “So Peter was kept in prison, but earnest prayer for him was made to God by the church. (buildings don’t pray)

During my years in college, the preacher at our congregation flipped this poem around:

“Here is the building.
It might have a steeple.
Open the doors,
See the Church—God’s people!“

A Church that Lasts

Like many people, I watched helplessly while Notre Dame burned on Monday. Like many, I have memories of visiting the world-famous cathedral. In the summer of 2001—before the terrorist attacks on September 11th of that same year—I traveled with my college choir to the country of France. We sang in several ancient cathedrals in France, including an impromptu performance at Mont-St. Michel. Notre Dame was the first cathedral in which we sang, and I marveled at the acoustics in that magnificent building. The only thing I could really look at (when I didn’t have to look at the conductor) was the rose window we faced while singing, and the exterior of the building prior to the performance. There were so many people that we were unable to tour the interior of the building.

As this masterpiece burned Monday evening, I vividly recalled the similar shock I felt as the two towers of the world trade center collapsed the same year I visited France. In the case of the towers, I was more horrified at the death of so many people than I was at the destruction of the buildings. In both incidents, however, I was shaken from the subconscious belief that such things are somehow permanent. Logically, we know that structures crumble, but we still fall into the mistaken belief that they will always be “around.” Of all the Seven wonders of the ancient world, the Great Pyramid at Giza is the only structure still standing, and yet we still fall into the trap of thinking the things we build in this world are permanent!

No matter how grand, strong, or glorious they might be, the buildings of this world are not eternal. This world is not our home, even though we desperately attempt to make it so.

The church—comprised of the souls which belong to Christ through faith—will not be destroyed.

“You are Peter, and on this rock I will build my church, and the gates of hell shall not prevail against it.”

No matter how many Christians are killed nor how often our buildings are destroyed, God will preserve our souls for eternity. The gates of hell shall not prevail against it. How else could the early Christians have walked calmly into the arena or persisted in claiming Christ as Lord when faced with crucifixion, death by lions, beheading, imprisonment, beatings, and stoning? Belief in an eternal kingdom strengthened their resolve against temporal suffering.

Some of the early believers had seen Christ crucified and also saw him after His miraculous resurrection. Because of the resurrection, they knew (and we know) that Jesus has the power to guard our souls from hell. Death is not the end. Buildings burn, bodies fail, groups are deceived, but the Lord will preserve His church from utter destruction.

You are a Living Stone

As you come to him, a living stone rejected by men but in the sight of God chosen and precious, you yourselves like living stones are being built up as a spiritual house, to be a holy priesthood, to offer spiritual sacrifices acceptable to God through Jesus Christ. For it stands in Scripture:

“Behold, I am laying in Zion a stone,
a cornerstone chosen and precious,
and whoever believes in him will not be put to shame.”

The church is made up of living stones—you, me, Paul, Peter, and thousands of others who have chosen to faithfully follow Christ over the centuries.

Peter goes on to write,

“…you are a chosen race, a royal priesthood, a holy nation, a people for his own possession, that you may proclaim the excellencies of him who called you out of darkness into his marvelous light. Once you were not a people, but now you are God’s people; once you had not received mercy, but now you have received mercy.”

What is the church?

It’s not the structure that burned on Monday night.
It’s not the buildings in which we meet each Sunday.
The church is God’s people.

Our bodies may be destroyed, but God has the power to bring our souls safely home.

13 thoughts on “A Church that Lasts”