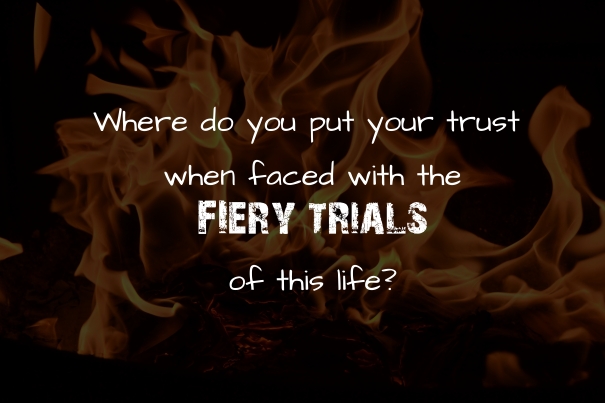 In whom or in what do you place your trust?

Just those three questions probably have a few people squirming. There is very little we can count on in the long-term. While people and forces may possess a certain reliability, they are all subject to failure.

Now for a hard question: Do you trust in God? (Think before you answer). If yes, how much?

It is easy to say we trust in the Lord, but much harder to live it.

The Bible is full of examples of people who demonstrated their trust by the choices they made. One such example is the account of Shadrach, Meshach and Abednego in Daniel 3. If you have never read Daniel, I would encourage you to at least read the first 6 chapters. It is chock-full of lessons in trusting in God. It will also introduce you to Shadrach, Meshach and Abednego, three men who demonstrated their trust in God.

These 3 men, along with their friend Daniel and approximately 10,000 other Israelites were deported from Israel to Babylon. Shadrach, Meshach, Abednego and Daniel were trained in the language and literature of Babylon so they could work for the king. By the third chapter of the book, they had demonstrated a strong faith and well-placed trust in the Lord. In Daniel 3, Nebuchadnezzar builds a statue and he commands everyone to fall down and worship it… or else. The threat was very real. The circumstances demanded a choice. Either bow to this thing—even though you don’t believe in it—or stand tall and face the fire.

“Therefore at that time certain Chaldeans came forward and maliciously accused the Jews.…

“There are certain Jews whom you have appointed over the affairs of the province of Babylon: Shadrach, Meshach, and Abednego. These men, O king, pay no attention to you; they do not serve your gods or worship the golden image that you have set up.”

Then Nebuchadnezzar in furious rage commanded that Shadrach, Meshach, and Abednego be brought. So they brought these men before the king. Nebuchadnezzar answered and said to them, “Is it true, O Shadrach, Meshach, and Abednego, that you do not serve my gods or worship the golden image that I have set up? Now if you are ready when you hear the sound of the horn, pipe, lyre, trigon, harp, bagpipe, and every kind of music, to fall down and worship the image that I have made, well and good. But if you do not worship, you shall immediately be cast into a burning fiery furnace. And who is the god who will deliver you out of my hands?”

Three men versus all of Babylon. Talk about peer pressure.

They stood before Nebuchadnezzar, the great king of Babylon who possessed the authority to kill them. He made an offer of leniency: bow to my god this time and you won’t be burned alive. He challenged their faith: “If you do not worship [my idol], who is the god who will deliver you out of my hands?” Most people would be intimidated into obedience, their beliefs overpowered by the threat of humiliation and death.

“O Nebuchadnezzar, we have no need to answer you in this matter. If this be so, our God whom we serve is able to deliver us from the burning fiery furnace, and he will deliver us out of your hand, O king. But if not, be it known to you, O king, that we will not serve your gods or worship the golden image that you have set up.”

Such confidence. Can you believe they said that?! To the King?!

Shadrach, Meshach and Abednego trusted in the God they could not see in the face of a fire they could see. They trusted God and no threat was going to sway them. It did not matter to them if they died that day. They counted the favor of God of greater worth than the favor of a mortal king. They feared the wrath of God more than the torture of a fiery furnace.

The account in Daniel doesn’t stop there. Shadrach, Meshach and Abednego got tied up and thrown into the furnace. Then, the miracle happened: no burning flesh, no singed hair, no dead bodies. Instead, Nebuchadnezzar, the great king himself, saw four men in the furnace walking around. And one of the four “looks like a son of the gods.”

Nebuchadnezzar was so floored by what he witnessed that he exclaimed: “Blessed be the God of Shadrach, Meshach, and Abednego, who has sent his angel and delivered his servants, who trusted in him, and set aside the king’s command, and yielded up their bodies rather than serve and worship any god except their own God.” (Daniel 3.28)

Their decision to trust in the Lord showed Nebuchadnezzar that the one true God had real power. He was deeply impressed by their unshakable trust.

In reading the first two chapters of Daniel, it is evident that this decision to trust God was not some random act of machismo. This was not their one shining moment of obedience. They had developed trust in the Lord long before this fiery test. Please read the first two chapters of Daniel because you will see for yourself that their trust didn’t start in the face of the fire.

Like Shadrach, Meshach and Abednego, we should be cultivating our trust in the Lord long before we are faced with the choice to obey God or obey men.

So, I’ll ask the question again: Do you trust in the Lord? How much?

The Word tells us: “Trust in the Lord with all your heart and lean not on your own understanding. In all your ways acknowledge Him and he will direct your paths.” (Proverbs 3.5-6)

God is faithful and therefore trustworthy. He isn’t shaky ground like retirement investments or the government. He is consistent in what He does. Look at the sunrise and sunset: every day the sun comes up and the sun goes down, even when it’s behind the clouds. It happens everyday without fail.

God’s Word gives us multiple examples of His great care for those who seek and serve Him wholeheartedly. God gives us this evidence of His faithfulness and trustworthiness if we but take the time to commit these lessons to our hearts.

…we all fail to trust at some time or other.

For starters, we aren’t omniscient. Though we are reluctant to admit it, we often think we know what is best. (I am so guilty of this!) We don’t see the whole picture of our life like God does. Sometimes we see a “no” to our prayers as faithlessness on the part of God. Sometimes our lives are unraveling before our very eyes and we feel abandoned by God. There are times when we are faced with losing friends, jobs, positions, respect or more if we stand up for God. We think that God won’t rescue us from the fire.

God never said He would spare us from the fire, but He has promised to be there when we walk through it.

My very dear friends, you may be passing through the fire right now. There may be very difficult choices that imperil your standing with God or with men. God is there with you in the midst of your trial, just as He stood in the midst of the furnace with Shadrach, Meshach and Abednego. If we stand for God, He will be glorified through our decision.

We have to continue making the decision to trust Him and to obey Him and not our own desires. Lord willing, the time will come when you will look back and you see that God was charting a very sound course for you. If you turn your back on God today, you will never see what amazing things He has planned for you tomorrow. Even if we don’t get that proverbial bed of roses in this life, something better is waiting for us in the next. Keep on enduring. Keep on trusting.

If we have died with Him, we will also live with Him;

If we endure, we will also reign with Him;

If we deny Him, He also will deny us;

If we are faithless, He remains faithful— For He cannot deny Himself.

Press on to know the Lord, my friends. You can trust Him.