This post is part of the weekly series on effective prayer. 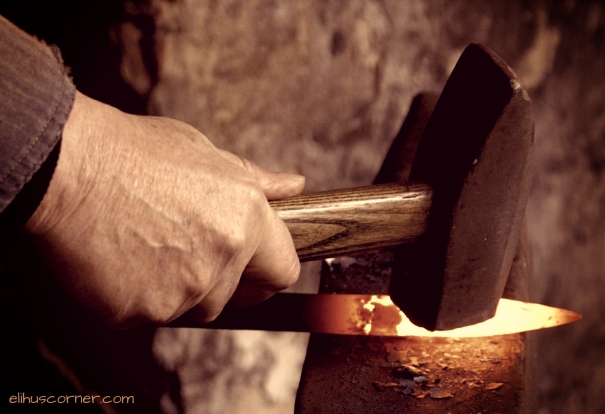 Count it all joy, my brothers, when you meet trials of various kinds, for you know that the testing of your faith produces steadfastness. And let steadfastness have its full effect, that you may be perfect and complete, lacking in nothing.

Last week, a friend of mine posted the following image on Facebook:

Have any of you found this to be true?

This makes me think of people in the Church who are knowledgeable, careful, humble, loving and whom by all appearances, have it together. They are orderly, unshakeable, and strong.They are the go-to-guy or gal when you need advice or help. They are pillars in the church. It isn’t just a facade either; if you spend an abundance of time with them one-on-one they truly are who they appear to be.

Does this describe someone you know?

The strongest of Christians are forged like steel—they are molded and strengthened through intense heat and intense pressure.

When I think of forging metal, I picture hot furnaces and dangerously powerful machinery.

Steel and iron—two of the strongest metals—are usually hot-forged.  The metals are put under intense pressure and heat to be formed into the desired shape. There are many ways of completing this process, but I, admittedly, am no expert on this subject. I do know that steel isn’t just warmed up to a baking temperature to be formed. It is heated to temperatures exceeding 1000 degrees Fahrenheit. It isn’t gently pressed into a mold like butter. It’s compressed or beaten into shape. If you’ve ever seen a blacksmith forging metal, you’ve seen glowing orange metal whacked repeatedly with a heavy hammer, powered by a muscular arm.

God desires His people to be strong. He wants us to withstand the alluring draw of this world. Living a life in contrast with the world takes courage and strength.

My reading has lately consisted of literature published by Navy Seals. The training they describe isn’t just physical, there is a mental beating that takes place as well. The training staff do everything they can to make those men quit. There is a saying frequently used during training in both military and paramilitary groups: “live for the next meal.” You focus on getting through a particular moment not by thinking long-term, but by completing this one training to make it to your next meal. Thinking too far ahead is dispiriting. The majority wash out. The pain is unendurable, the strain too great. The guys that do emerge successfully are hardened… like steel. Does that make them unbreakable? Are they perfect? No. But they are a mighty force to be reckoned with.

What does all this have to do with strong Christians and prayer?

The Christians that are truly strong, did not get to that point without great difficulty, nor is their testing complete. If it appears that nothing seems to shake them, it is more likely that they have learned to draw strength from God and they bring their pain to Him first. There are still incidents that hurt, moments of unspeakable pain, and periods of unutterable grief. They just seem stronger because they either don’t talk about it or they seem little fazed by it.

They have been forged, tested and not found lacking…

…but they are NOT invincible.

They still need our prayers, and our encouragement.

I want you think of one person who is a pillar in the church. They don’t have to be recognized as such, but they would be sorely missed if they were gone. Write down their name and put it somewhere you regularly pray or a place you look at often.

For the next seven days, commit to praying the following for them:

1) Pray that they will practice humility.

It’s easy for people who are strong to get a big head. They think they’re too smart to learn, to strong to break and too big to fail. Pray that the strong person you are praying for will remain humble before God and His Word, and not place his or her confidence in their own strength.

Remember Samson? He was confident in his own strength and failed to remember that his strength came from the Lord. He got up to fight one day and was soundly defeated.

The bigger they get, the harder they fall.

Pray that this person will not be self-inflated, but will walk humbly with God.

2) Pray for them to resist temptation.

Remember David? David was king over Israel. He had victory in everything. Nothing seemed to hard for him!

Then, there was this woman named Bathsheba…

Instead of being with his troops fighting the battles of the country, he was sitting idle at home watching a woman bathe on the roof of her house. Then he went a step further and took her for himself. When he found out she was pregnant, he brought her husband home from the front lines to be with her so that he [David] could cover his tracks, but Uriah (Bathsheba’s husband) refused to do so. David sent Uriah to the front line of the battle and ordered that his captain pull the troops away from him, leaving him defenseless. Uriah was killed.

After Uriah was dead, David took Bathsheba for his own wife.

David’s poor choices had staggering consequences. At least 2 people died from his sinful decisions: a mighty warrior and a helpless infant. When he was finally confronted about his sin, he repented with every ounce of strength he could muster. David was crushed by what He had done (read Psalm 51). He received God’s forgiveness and is still counted among the righteous of God, being mentioned as “a man after God’s own heart” in the New Testament. And yet, the rest of his life was restless and troubled as he payed the consequences of his sins.

Think of the person you are praying for. Do you want them to suffer lifelong or eternal consequences for falling into temptation? Of course not! Pray that when temptation comes, they will take the way of escape that God provides.

3) Pray for them to make wise choices.

The Apostle Peter is a great example of a good man blundering into bad choices.

This is the man who fervently proclaimed to Jesus that he would go with him to death, then flaked under pressure and denied that he even knew Jesus.

This is the man who spoke to an enormous crowd on the day of Pentecost and 3,000 people were baptized into Christ. He’s also the same person who succumbed to peer pressure and wouldn’t eat with the gentile Christians when his Jewish buddies showed up. It took Paul’s open rebuke to set him straight.

Because of his position, his choices swayed other, more impressionable Christians. The strong can do great damage with their poor choices.

Pray for them to make godly choices and to live their lives in such a way as to bring honor to God and the Church.

4) Pray that they will put their trust fully in God.

Do you ever find yourself placing your trust in your own strength? You may not do it consciously, but I’m sure you have from time to time. What do you do when your strength fails you?

In American Sniper, Chris Kyle described some of the jihadist hideouts they found as being a druggies dream come true. Many of the jihadists had to use drugs to get their courage up to fight. They couldn’t trust in their own strength or courage so they took in some chemical courage.

If you think a strong Christian is immune to trusting in chemical courage, you are wrong. Plenty of good men and women have been undone by trusting in a drug or a drink to give them strength to carry on. It isn’t just chemical either. They might put their trust in their own knowledge, wealth or influence.

Pray for them to trust fully in God.

I want to ask you to do something else for this person you are praying for:

Send them a note, a text or an email. Make it known to them that you are praying for them. Your words may be like a glass of cold water on sweltering August day.

Let us pray to the Lord each day this week to great effect!