This is the final installment in the series, “The Effects of Knowing God.” To read the previous post, click here. 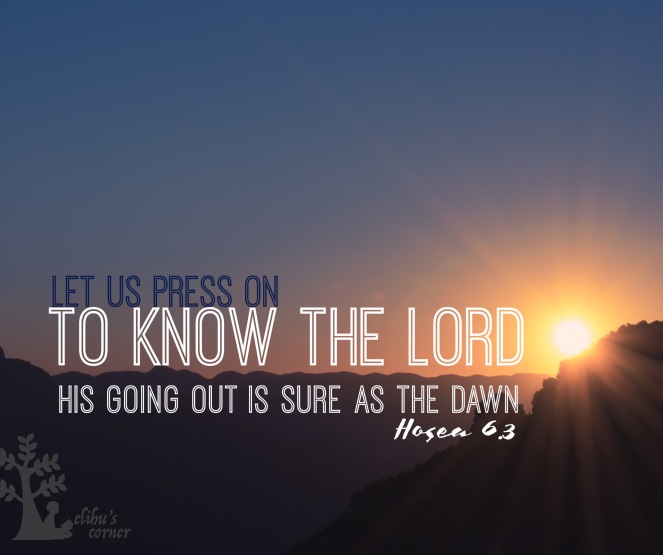 Relationships have the potential to change us. Much depends on our character, stubbornness, and admiration of the people we are connected to. Sometimes our knowledge of a person will draw us closer to them, possibly shifting our priorities. Sometimes our knowledge of a person will cause us to beat a slow (or rapid) retreat. Inevitably, that relationship will alter us in some way. It may change how we look at, respond to, or treat people we meet in the future.

The best relationships are those which create such an abundance of love, loyalty, and respect that it trickles down into other relationships.

We must press on to know the Lord. We must pursue Him as we would a loved one. Pursuing an ever-deeper relationship with God transforms the soul from wretchedness to pricelessness.

Moses experienced transformation as He grew closer to God. While still prone to err, He did so less. Listen to what God says about Moses:

“Hear my words: If there is a prophet among you, I the Lord make myself known to him in a vision; I speak with him in a dream. Not so with my servant Moses. He is faithful in all my house. With him I speak mouth to mouth, clearly, and not in riddles, and he beholds the form of the Lord. Why then were you not afraid to speak against my servant Moses?”

It makes me wonder: if someone spoke against me, would the Lord confirm their accusations, or commend me? Am I being transformed into His likeness or simply going the way of the world?

From Self-Preserving to Self-Sacrificing

After Moses killed an Egyptian (and learned that the thing was known), he did what any self-preserver would do: He took off running.

Moses whiled away the next forty years in Midian having children and herding sheep. Moses, a man raised in the upper echelons of Egyptians society was in an occupation considered abominable by the Egyptians. We are not privy to Moses’ thoughts during this time, but one thing is certain: God used this time to prepare Moses for His purpose. Moses was shepherding sheep, but soon he would be shepherding people.

At the burning bush, God asked Moses to go to Egypt to deliver the Israelites. Moses made HEAPS of excuses—and finally said what he was really thinking, “Lord, please send someone else…” He knew what the Lord asked of him would not be easy.

This first meeting with the Lord reveals a glimmer of self-sacrifice in Moses as he submits to the will of the Lord and travels to Egypt.

The incident of the golden calf showcases Moses’ amazing transformation. First, we see Moses’ anger at what the people had done as he hurled the stone tablets (written on by God Himself) to the ground. This was a righteous anger—similar to what Jesus did in the temple by driving out the moneychangers. Second, we see Moses’ willingness to suffer for the sin of the people:

Then Moses returned to the Lord, and said, “Alas, this people has committed a great sin, and they have made a god of gold for themselves.  But now, if You will, forgive their sin—and if not, please blot me out from Your book which You have written!” The Lord said to Moses, “Whoever has sinned against Me, I will blot him out of My book.

I don’t know about you, but I’m no Moses. If I had seen what the people had done, I doubt I would have borne their punishment on any level. I’d have let the Lord wipe them out! (It just shows how far I have to go). Moses, however, spent years as a shepherd. Shepherds would often put themselves in harm’s way to protect their sheep. Moses transformed from a self-preserving man to a self-sacrificing leader, willing to lay down his life for his people.

From Tremulous to Trusting

As mentioned above, Moses was afraid to return to Egypt in spite of the Lord’s assurances. By the time we get to the Red Sea crossing, we see a Moses who has learned to trust in the power of Almighty God:

And Moses said to the people, “Fear not, stand firm, and see the salvation of the Lord, which he will work for you today. For the Egyptians whom you see today, you shall never see again. The Lord will fight for you, and you have only to be silent.”

Furthermore, as Moses prepares to hand leadership to Joshua, he gives this encouragement:

“Be strong and courageous, for you shall go with this people into the land that the Lord has sworn to their fathers to give them, and you shall put them in possession of it. It is the Lord who goes before you. He will be with you; he will not leave you or forsake you. Do not fear or be dismayed.”

Have I learned this level of trust in the Lord?

From Excuses to Acceptance

For many years, I had a hard time understanding the Lord’s punishment of Moses and Aaron over their fumble at the waters of Maribah. If you aren’t familiar with the account, the Israelites were complaining—again—and God told Moses to speak the rock and water would come out. Here’s what happened:

“Hear now, you rebels: shall we bring water for you out of this rock?”

And Moses lifted up his hand and struck the rock with his staff twice, and water came out abundantly, and the congregation drank, and their livestock.

And the Lord said to Moses and Aaron, “Because you did not believe in me, to uphold me as holy in the eyes of the people of Israel, therefore you shall not bring this assembly into the land that I have given them.”

This punitive action—that Moses could not enter the land because he said and did the wrong thing—seemed disproportionate to the offense. However, Moses had committed a grievous error in saying, “Shall we bring water for you.” God was providing the water, not Moses! He had dishonored God’s power!

What is significant is what is absent: Moses doesn’t make any attempts to justify himself. He doesn’t ask for it all to end like he had before. He accepts His punishment as just and continues to be faithful in service to God.

Of even greater significance is the grace of God. Although Moses had to suffer an earthly consequence, he was forgiven. If Moses’ soul had been condemned, would he have appeared with Jesus at the transfiguration (Matt. 17)? Furthermore, the Lord allowed him to look upon the land at his death, and buried him in a hidden place that has not been found. Listen to this final testimony about Moses:

And there has not arisen a prophet since in Israel like Moses, whom the Lord knew face to face, none like him for all the signs and the wonders that the Lord sent him to do in the land of Egypt, to Pharaoh and to all his servants and to all his land, and for all the mighty power and all the great deeds of terror that Moses did in the sight of all Israel.

Moses may not have received the earthly reward of the promised land, but what he did receive was far greater and more lasting. He remained faithful to God to the very end, even when he knew there would be no earthly reward. His relationship with God transformed Him into a man of intense faith.

You and I are still running our race of faith. Keep pressing on to know the Lord, as Moses did, and allow Him to transform you into something far more precious than you can imagine.

Let us know; let us press on to know the Lord;
his going out is sure as the dawn;
he will come to us as the showers,
as the spring rains that water the earth.

Has knowing the Lord transformed you? Is your transformation a testimony to the power of Christ in your life?

Or are we still too much like the world?

8 thoughts on “The Right Relationship Changes Everything”