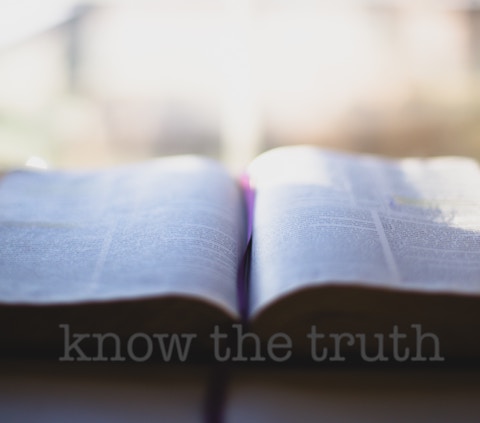 This rather deep question was asked by a Roman Governor over two thousand years ago, named Pontius Pilate. It’s difficult to determine from the text if Pilate was asking the question sarcastically or pensively, but as someone once pointed out, the truth was standing right in front of Him—namely Jesus Christ.

People have been asking some variation of this question for millennia:

What is truth (by definition)?

According to the ubiquitous Merriam-Webster dictionary, truth is defined as the following:

(1): the body of real things, events, and facts

(4): a judgment, proposition, or idea that is true or accepted as true

Notice how in these four definitions, Websters uses words like “real” and “reality.” In one of the definitions (probably the relativist editor wrote this one) it is “accepted” as true. The trouble with this fourth definition is that it opens the door for relativism. Yet by its purest definition, truth deals in those inescapable realities, like gravity, death, heat, cold, etcetera.

These days, one may, in fact, be biologically male or biologically female, but our culture says that such undeniable facts are subject to interpretation. Even my seven-year-old recognizes that there are distinctly different sexes, so why is our culture so bent on bending the facts?

Distortions of reality come when reality is far too inconvenient for the purposes of those who want to do what is wrong. When we refuse to accept truth, it is often because we want to make our own laws and rules and not be subject to facts that we feel are inferior to us. Our culture has lifted up self as god, and such a self-lifting has consequences!

Why do you not understand what I say? It is because you cannot bear to hear my word.You are of your father the devil, and your will is to do your father’s desires. He was a murderer from the beginning, and does not stand in the truth, because there is no truth in him. When he lies, he speaks out of his own character, for he is a liar and the father of lies. But because I tell the truth, you do not believe me.

The Jews always seemed to think they could beat Jesus in a debate. No matter how many times he stumped them, humiliated them, or flat out shut their mouths, they came back for more. When they couldn’t accept the truth or win the debate, they sought to kill him. (It sounds a good deal like modern politics and social media—if you can’t beat ’em, assassinate them or their character.)

There is this prevailing idea that what we believe does not affect how we behave. Current events suggest otherwise. The Pharisees refused to accept Jesus’ truths because He challenged their traditions. Their traditions were not God’s truth.

As Jesus points out to the Jews, denial of truth is the acceptance of lies. When we adopt these lies as our “new truth” we are not children of God, but children of the Father of Lies (Satan). Once we go down this path, any lie becomes acceptable. We can say women are men or men are women. We can abort children because the father of lies says they aren’t really a life until they reach whatever point we decide to call them “a life.” We can make any desire acceptable if there is no concrete truth.

The trouble with truth is that it inevitably exposes such lies. Someday, we will all stand before the judge of perfect truth. If we have lived in denial of that truth, we will suffer eternal consequences.

Jesus said to him, “I am the way, and the truth, and the life. No one comes to the Father except through Me.

When we accept truth, we make well-informed choices. If I accept the truth that I have sinned, I will confess it to God and ask His forgiveness, having confidence that He will forgive me. When faced with future sin, I can make the choice to avoid it and its lies. Truth makes all the difference in our lives. We may not reap the benefits of following truth in a world determined to uphold lies, but we will reap the rewards of truth when we stand in the light of its Author for all eternity.

Truth is only troublesome to those who stand against it. God’s Word is truth. His Son is Truth. His Spirit is Truth. If you want to live in the light of truth, believe the Author of truth over the conjurer of lies.

“All who desire to live a godly life in Christ Jesus will be persecuted, while evil people and impostors will go on from bad to worse, deceiving and being deceived. But as for you, continue in what you have learned and have firmly believed, knowing from whom you learned it…”

This is part 4 of the series “Belief Shapes Action.” To read the previous posts, click the links below:

16 thoughts on “The Trouble With Truth”